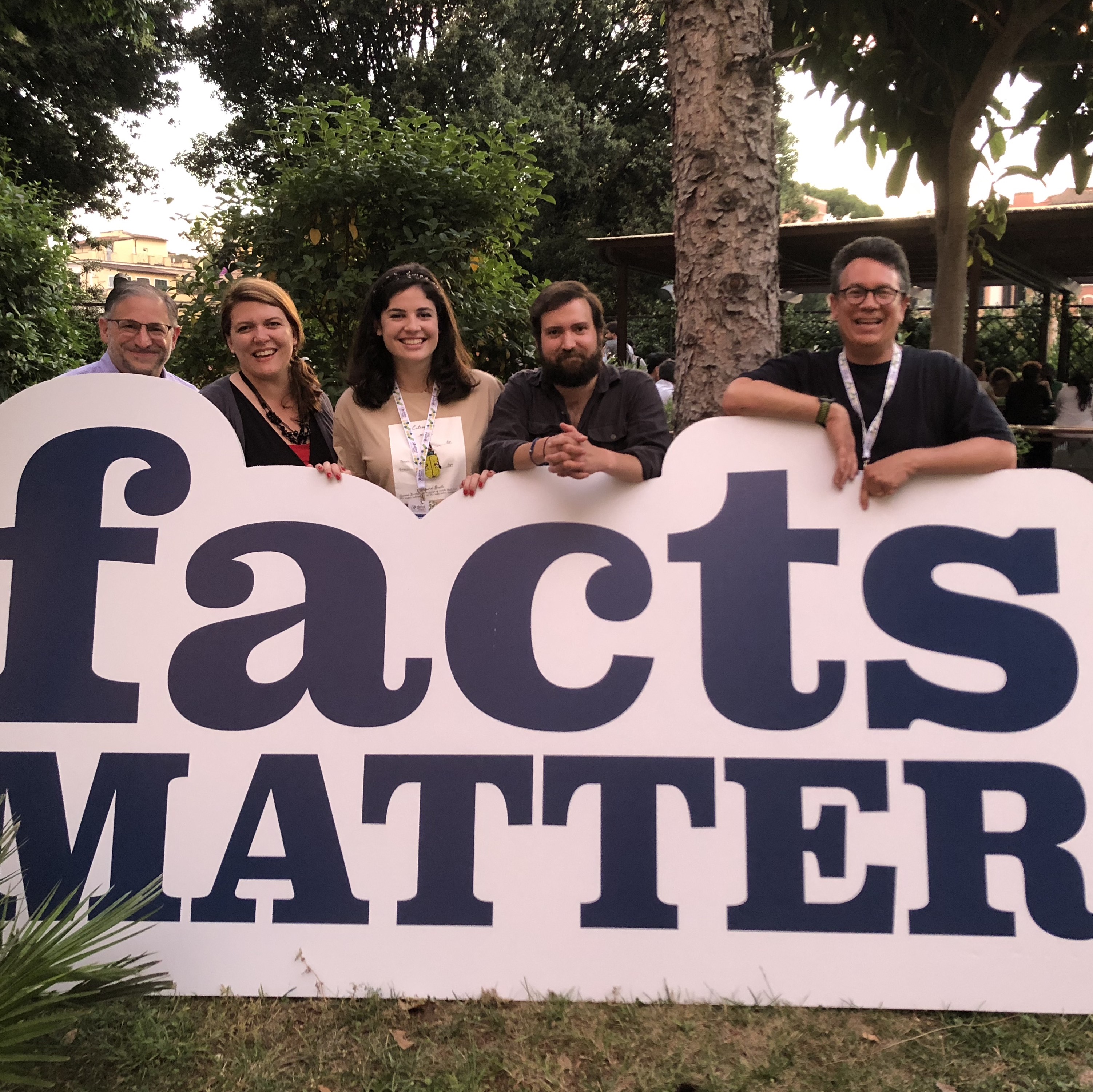 My opening remarks at Global Fact V, the fifth annual meeting of the world’s fact-checkers, organized by the International Fact-Checking Network, held June 20-22 in Rome.

A couple of weeks ago, a photo from our first Global Fact showed up in my Facebook feed. Many of you will remember it: we had been all crammed into a classroom at the London School of Economics. When we went outside for a group photo, there were about 50 of us.

To show how our conference has grown, I posted that photo on Twitter along with one from our 2016 conference that had almost twice as many people. I also posted a third photo that showed thousands of people gathered in front of the Vatican. I said that was our projected crowd for this conference.

I rate that photo Mostly True.

What all of our conferences have in common is that they are really about community. It all began in that tiny classroom at the London School of Economics when we realized that whether we were from Italy or the U.K. or Egypt, we were all in this together. We discovered that even though we hadn’t talked much before or in many cases even met, we were facing the same challenges — fundraising and finding an audience and overcoming partisanship.

It was also a really powerful experience because we got a sense of how some fact-checkers around the world were struggling under difficult circumstances — under governments that provide little transparency, or, much worse, governments that oppress journalists and are hostile toward fact-checkers.

Throughout that first London conference there was an incredible sense of community. We’d never met before, but in just a couple of days we formed strong bonds. We vowed to keep in touch and keep talking and help each other.

It was an incredibly powerful experience for me. I was at a point in my career where I was trying to sort out what I would do in my new position in academia. I came back inspired and decided to start an association of fact-checkers – and hold these meetings every year.

The next year we started the IFCN and Poynter generously agreed to be its home. And then we hired Alexios as the leader.

Since then, there are have been two common themes. One you hear so often that it’s become my mantra: Fact-checking keeps growing. Our latest census of fact-checking in the Reporters’ Lab shows 149 active fact-checking projects and I’m glad to see that number keep going up and up.

The other theme, as I noted earlier, is community. I thought I’d focus this morning on a few examples.

Let’s start with Mexico, where more than 60 publishers, universities and civil society organizations have started Verificado 2018, a remarkable collaboration. It was originally focused largely on false news, but they’ve put more emphasis on fact-checking because of public demand. Daniel Funke wrote a great piece last week about how they checked a presidential debate.

In Norway, an extraordinary team of rivals has come together to create Faktisk, which is Norwegian for “actually” and “factually.” It launched nearly a year ago with four of the country’s biggest news organizations — VG, Dagbladet, NRK and TV 2 – and it’s grown since then. My colleague Mark Stencel likened it to the New York Times, The Washington Post and PBS launching a fact-checking project together.

At Duke, both of our big projects are possible because of the fact-checkers’ commitment to help each other. The first, Share the Facts and the creation of the ClaimReview schema, grew out of an idea from Glenn Kessler, the Washington Post Fact Checker, who suggested that Google put “fact-check” tags on search results.

That idea became our Duke-Google-Schema.org collaboration that created what many of you now use so search engines can find your work. And one unintended consequence: it makes automated fact-checking more possible. It all started because of one fact-checker’s sense of community.

Also, FactStream, the new app of our Tech & Check Cooperative, has been a remarkable collaboration between the big US fact-checkers — the Post, FactCheck.org and PolitiFact. All three took part in the beta test of the first version, our live coverage of the State of the Union address back in January. Getting them together on the same app was pretty remarkable. But our new version of the app –which we’re releasing this week – is even cooler. It’s like collaboration squared, or collaboration to the second power!

It took Glenn’s idea, which created the Share the Facts widget, and combined it with an idea from Eugene Kiely, the head of FactCheck.org, who said we should create a new feature on FactStream that shows the latest U.S. widgets every day.

So that’s what we did. And you know what: it’s a great new feature that reveals new things about our political discourse. Every day, it shows the latest fact-checks in a constant stream and users can click through, driving new traffic to the fact-checking sites. I’ll talk more about it during the automated demo session on Friday. But it wouldn’t be possible if it weren’t for the commitment to collaboration and community by Glenn and Eugene.

We’ve got a busy few days ahead, so let’s get on with it. There sure are a lot of you!

As we know from the photographs: fact-checking keeps growing.