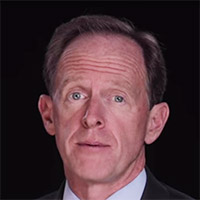 Throughout the presidential campaign, Donald Trump and Hillary Clinton have spent millions of dollars on everything from Snapchat filters to personalized fact-checking sites. But state-level campaigns have relied on the basics, using trusty slogans that in many cases seem like a throwback to the simpler days of campaigning.

Some slogans pack the punch of an attack line while others use a more positive approach.

The Reporters’ Lab’s Duke Ad Watch team has spent the past two months working with the Political TV Ad Archive to identify factual claims in political ads. An analysis of the 263 ads with fact-checkable claims found that 36 commercials used slogans to either attack or promote a specific politician.

Only six ads used positive slogans, all of which were punchy sayings about a candidate being “right” for their state.

But a vast majority of slogans — 30 in total — were used to peg candidates as too risky, too liberal or too radical. Campaigns also attacked their competitors for putting Wall Street, profits or the Koch brothers over their constituents.

Below, find a breakdown of the types of slogans used in 2016 campaign commercials. 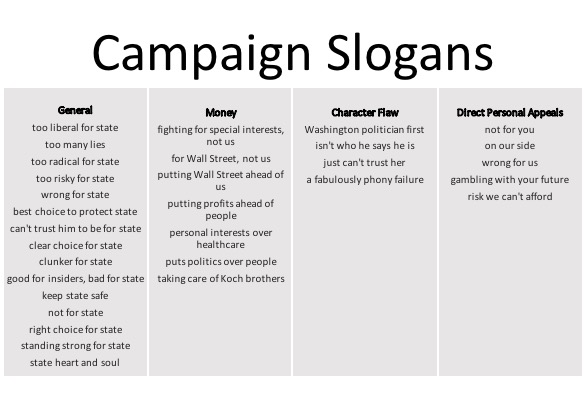 Taglines are punchy enough to catch viewers’ attention, but also vague enough that they can’t be fact-checked. After all, what does “too risky” mean? There’s no definitive test, which makes quippy slogans ideal for campaign ads hoping to leave viewers with a definitively negative or positive opinion of a candidate.

So, what are these slogans actually saying?

Many of the taglines we recorded appealed to trust, or lack thereof. Though many slogans didn’t directly use the word “trust,” they alluded to questionable motives and relationships with big money. Some examples include:

“Joe Heck puts Wall Street ahead of us.”
“Patrick Murphy. Fighting for special interests, not us.”
“Rob Portman. Can’t trust him to be for Ohio.”
“Hillary Clinton. Just can’t trust her.”

But the trust appeal is not new. A 1988 ad attacking Michael Dukakis finished with, “America can’t afford that risk.”

Similarly, an ad targeting John Kerry back in 2004 ended with “John Kerry cannot be trusted.” And then there’s the 2006 anti-Harold Ford ad claiming he was “just not right.”

Simply put, taglines are a tried and true method for attack ads and have been used since the early days of political advertising. Even as we find ourselves in one of the strangest election cycles, it is clear that the basics of political ads have not been thrown out the window just yet.

Candidates may change, but stale puns in political slogans are forever.