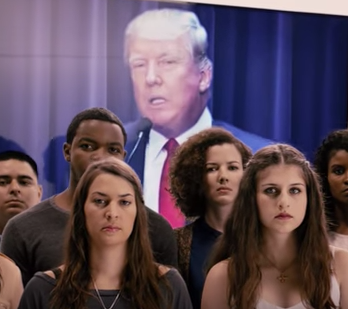 Many pro-Hillary Clinton ads aren’t saying anything new about Donald Trump, or even making fact-based claims about his policies. They’re literally using Trump’s own words against him.

Her ads typically contain snippets from Trump’s speeches and interviews, in order to draw attention to the instances where he has incited violence or insulted women (or veterans, or immigrants, or people with disabilities…). And in the ads, the targets of his comments are usually watching, shaking their heads and expressing hurt and indignation in reaction to the soundbites.

In each spot, we watch individuals react as their demographic comes up to bat. In an ad called “Watching”, a woman gets ready for work when a 1994 ABC interview with Trump comes on the TV. “Putting a wife to work is a very dangerous thing,” he says. “I don’t want to sound too much like a chauvinist…”

Seconds later, a Korean War veteran looks up from his seat at the bar to watch as Trump says at the Iowa Family Leadership Summit earlier this year, “[John McCain is] a war hero because he was captured. I like people that weren’t captured.”

In “Role Models”, unsupervised children watch while Trump makes claims on their TVs. Among other sound bites, the ad highlights the line, “I could stand in the middle of Fifth Avenue and shoot somebody and I wouldn’t lose any voters,” which was said during an Iowa campaign stop. What’s more, the children don’t seem fazed by the comments he’s making.

Some ads prove that his comments anger more than just their targets. In “Wall”, a diverse group of college-aged men and women glare into the camera as Trump is broadcast on a screen behind them. “When Mexico sends its people…they’re bringing crime. They’re rapists…,” he says in the speech announcing his intent to run for president.

The groups responsible for these ads — Hillary for America, Priorities USA Action and NextGen California — are trying to illustrate how a Trump presidency would only disrespect their experiences and their voices.

But the Clinton campaign is stepping up to this challenge in an unusual presidential election cycle, one in which rhetoric is everything and concrete policy is seemingly irrelevant. Instead of using fact-based research and policy plans to convince voters of their abilities, Trump and Clinton are relying heavily on how voters are feeling as opposed to the candidates’ strengths and weaknesses.

You can see this phenomenon in the Duke Ad Watch database of campaign commercials. Just one-third of pro-Trump ads have factual claims in them — and the same statistic is true of pro-Clinton ads. One-third! For the reader who doesn’t transcribe political ads for 10 hours a week, I’ll put that into perspective for you:

In Iowa, Patty Judge is challenging incumbent Chuck Grassley for his seat in the U.S. Senate. Two-thirds of the pro-Grassley and pro-Judge ads that have aired contain factual claims about the candidate or their opponent.

The stark difference in fact usage signals that the Iowans’ conversation is not focused on whether Grassley is brash or Judge is likable. It means they’re zeroing in on what each candidate has — or hasn’t — done for Iowans: whether they’ve created jobs, or fostered a wind energy economy, or enabled Congress’ inaction throughout Barack Obama’s presidency.

So what are Trump and Clinton talking about in their ads, if not the facts?

They’re exploring whether each candidate feels like a trustworthy choice for president. Whether they’re racist, sexist or just really earnest (“Does Trump really speak for you?” asks an ad called “Speak”). Whether each candidate has the compassion, worldview and energy necessary to understand communities’ — voters’ — daily challenges.

They’re working to convince you that they’ll be your relatable, down-to-earth champion through thick and thin.