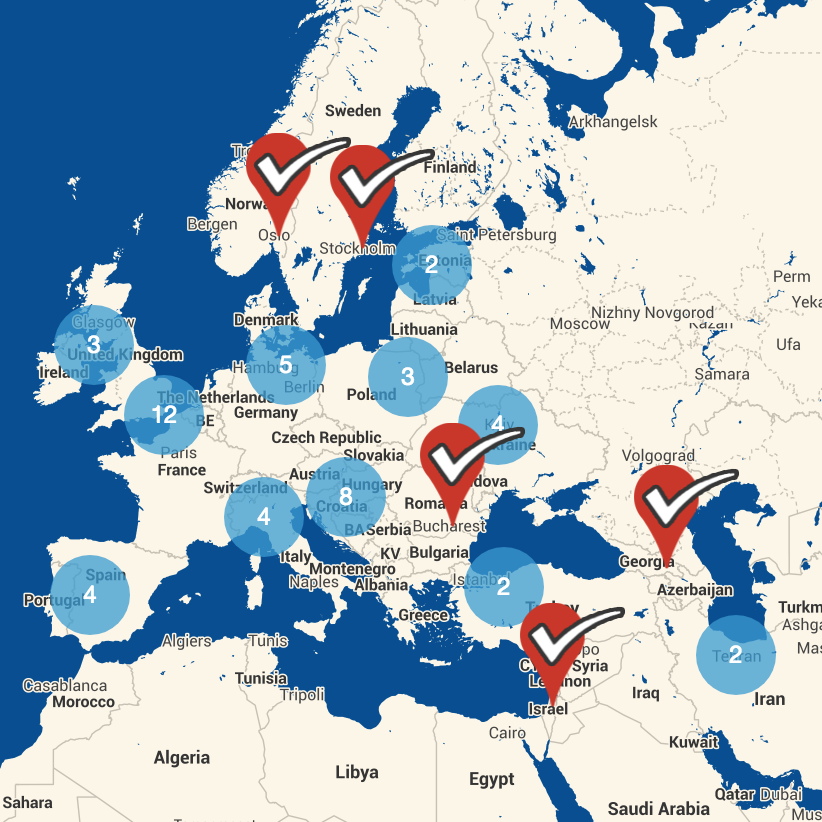 The number of fact-checkers around the world has more than tripled over the past four years, increasing from 44 to 149 since the Duke Reporters’ Lab first began counting these projects in 2014 — a 239 percent increase. And many of those fact-checkers in 53 countries are also showing considerable staying power.

This is the fifth time the Reporters’ Lab has tallied up the organizations where reporters and researchers verify statements by public figures and organizations and keep tabs on other sources of misinformation, particularly social media. In each annual census, we have seen steady increases on almost every continent — and the past year was no different.

The 2018 global count is up by nearly a third (31 percent) over the 114 projects we included in last year’s census. While some of that year-over-year change comes because we discovered established fact-checking ventures that we hadn’t yet counted in our past surveys, we also added 21 fact-checking projects that launched since the start of 2017, including one — Tempo’s “Fakta atau Hoax” in Indonesia — that opened for business a month ago. 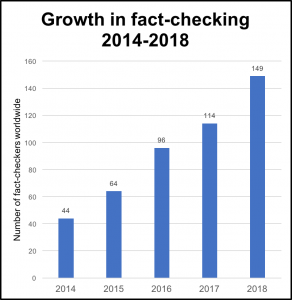 And that list of startups does not count one short-run fact-checking project — a TV series produced by public broadcaster NRK for Norway’s national election last year. That series is now among the 63 inactive fact-checkers we count on our regularly updated map, list and database. Faktisk, a Norwegian fact-checking partnership that several media companies launched in 2017, remains active.

Many of the fact-checkers we follow have shown remarkable longevity.

Based on the 143 projects whose launch dates we know for certain, 41 (29 percent) have been in business for more than five years. And a diverse group of six have already celebrated 10 years of nearly continuous operation — from 23-year-old Snopes.com, the grandparent of hoax-busting, to locally focused “Reality Checks” from  WISC-TV (News 3) in Madison, Wisconsin, which started fact-checking political statements in 2004. Some long-term projects have occasionally shuttered between election cycles before resuming their work. And some overcame significant funding gaps to come back from the dead.

On average, fact-checking organizations have been around four years.
One change we have noted over the past few years is some shifting in the kind of organizations that are involved in fact-checking and the way they do business. The U.S. fact-checker PolitiFact, for instance, began as an independent project of the for-profit Tampa Bay Times in 2007. With its recently announced move to Poynter Institute, a media training center in St. Petersburg, Florida, that is also the Times’ owner, PolitiFact now has nonprofit status and is no longer directly affiliated with a larger news company.

The non-media fact-checkers include projects that are affiliated with universities, think tanks and non-partisan watchdogs focused on government accountability. Others are independent, standalone fact-checkers, including a mix of nonprofit and commercial operations as well as a few that are primarily run by volunteers.

Fact-checkers, like other media outlets, are also seeking new ways to stay afloat — from individual donations and membership programs to syndication plans and contract research services. Facebook has enlisted fact-checkers in five countries to help with the social platform’s sometimes bumpy effort to identify and label false information that pollutes its News Feed. (Facebook also is a Reporter’s Lab funder, we should note.) And our Lab’s Google-supported Share the Facts project helped that company  elevate fact-checking on its news page and other platforms. That’s a development that creates larger audiences that are especially helpful to the big-media fact-checkers that depend heavily on digital ad revenue.

The worldwide growth in fact-checking means more countries have multiple reporting teams keeping an ear out for claims that need their scrutiny.

There’s also growing variety among the fact-checkers. Our database now includes several science fact-checkers, such as Climate Feedback at the University of California Merced’s Center for Climate Communication and Détecteur de Rumeurs from Agence Science-Presse in Montreal. Or there’s New York-based Gossip Cop, an entertainment news fact-checking site led since 2009 by a “reformed gossip columnist.” (Gossip Cop is also another example of a belated discovery that only appeared on our fact-checking radar in the past year.)

As the fact-checking community around the world has grown, so has the International Fact-Checking Network. Launched in 2015, it too is based at Poynter, the new nonprofit home of PolitiFact. The network has established a shared Code of Principles as well as a process for independent evaluators to verify its signatories’ compliance. So far, about a third of the fact-checkers counted in this census, 47 of 149, have been verified.

The IFCN also holds an annual conference for fact-checkers that is co-sponsored by the Reporters’ Lab. There is already a wait list of hundreds of people for this June’s gathering in Rome.

While the U.S. count ticked up slightly from 43 a year ago, some of that increase came from the addition of newly added long-timers to our database — such as the Los Angeles Times, Newsweek magazine and the The Times-Union newspaper in Jacksonville, Florida. Another of those established additions was the first podcast in our database: “Science Vs.” But that was an import. “Science Vs.” began as a project at the Australian public broadcaster ABC in 2015 before it found its U.S. home a year later at Gimlet Media, a commercial podcasting company based in New York.

Among the new U.S. additions are two traditionally conservative media outlets: The Daily Caller (and its fact-checking offshoot Check Your Fact) and The Weekly Standard. To comply with the IFCN’s Code of Principles, both organizations have set up internal processes to insulate their fact-checkers from the reporting and commentary both publications are best known for.

Another new addition was the The Nevada Independent, a nonprofit news service that focuses on state politics. Of the 47 U.S. fact-checkers, 28 are regionally oriented, including the 11 state affiliates that partner with PolitiFact.

We originally expected the U.S. number would drop in a year between major elections, as we wrote in December, so the small uptick was a surprise. With this year’s upcoming midterm elections, we expect to see even more fact-checking in the U.S. in 2018.

The Reporters’ Lab is a project of the DeWitt Wallace Center for Media & Democracy at Duke University’s Sanford School for Public Policy. It is led by journalism professor Bill Adair, who was also PolitiFact’s founding editor. The Lab’s staff and student researchers identify and evaluate fact-checkers that specifically focus on the accuracy of statements by public figures and institutions in ways that are fair, nonpartisan and transparent. See this explainer about how we decide which fact-checkers to include in the database. In addition to studying the reach and impact of fact-checking, the Lab is home to the Tech & Check Cooperative, a multi-institutional project to develop automated reporting tools and applications that help fact-checkers spread their work to larger audiences more quickly.