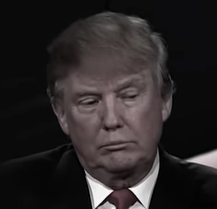 Hillary Clinton is getting support in her attack advertising from an unusual source: Republicans.

Widely respected and ordinary Republicans alike are crossing party lines to attack Trump, with several Clinton ads featuring prominent GOP politicians denouncing their nominee. Most of the conservative attacks against Trump are not on specific policy issues, but instead on a lack of trust in a potential Trump presidency with access to the nuclear codes.

Hillary for America’s “Confessions of a Republican” ad, which first aired in June, echoes an ad by the same name supporting Democrat Lyndon B. Johnson during the 1964 campaign. Clinton’s simple commercial shows William Bogert — an old Republican actor — in black and white, sitting in a chair and talking straight to the viewer, just like a younger Bogert did 52 years ago.

Bogert, who is never named in the ad, claims to come from a family of Republicans, but attempts to distinguish Trump from Republican presidential nominees of years past.

Bogert raises his voice when he says Trump wants to be “unpredictable” with nuclear weapons, calling the nominee a “threat to humanity.”

There is no background music and no text for the majority of the ad, starkly contrasting with many of Clinton’s campaign ads in this cycle. But its simplicity may connect with moderate voters in their living rooms.

In the event a relatable Republican like Bogert cannot convince his peers to vote against Trump, the Clinton campaign has also used clips of conservative politicians and advisors trying to convey a lack of trust in Trump.

All three right-wing voices question Trump’s judgment and plant fear in viewers’ minds about what he would do if he had access to nuclear weapons, an issue Clinton wants to keep at the forefront of the campaign.

“You have to ask yourself, ‘Do I want a person of that temperament in control of the nuclear codes?’” Krauthammer says. “As of now, I’d have to say no.”

Hillary for America continued its bipartisan assault on Trump with a September ad titled “Agree,” using voices from such Republican politicians as Mitt Romney, Lindsey Graham and Jeff Flake. As opposed to the bureaucrats that condemned Trump’s glib treatment of nuclear weapons, these are legislators suggesting to their conservative constituencies that Trump will not represent their views.

The ad does not have much substance beyond a condemnation of Trump, but its power is in the magnitude of elected Republicans that have spoken out against him.

In 1964, Barry Goldwater alienated many moderate Republicans with his aggressive stance on the Soviet Union and nuclear weapons, prompting the original “Confessions of a Republican” ad. Goldwater’s candidacy also led to the infamous “Daisy” ad that showed a little girl in a meadow, pulling petals from a flower before an atomic bomb went off.

But no candidate has ever launched as expansive an advertising campaign with help from the other side as Clinton has this year. Trump is one of the most divisive presidential candidates the U.S. has seen, and Clinton — who is not viewed very favorably in her own right — is keeping the spotlight on Trump with this strategy.

By using Republicans to her advantage, Clinton is taking the focus away from wedge issues that divide the population, like gun control and race relations, and instead highlighting bipartisan foreign policy questions. Even if rural voters in swing states do not support Clinton’s liberal policies, many probably would be uncomfortable with the U.S. dropping nuclear bombs to solve the world’s problems. Clinton is trying to convince these voters that this would be a real possibility in a Trump presidency.

And if they don’t believe Clinton, they are likely to believe the Republicans they have lived with, respected and voted for in the past.