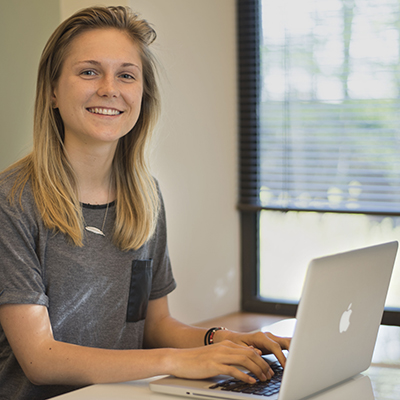 In a sunny corner office at Duke University, four students are building bots to do tasks that are too tedious for humans.

The project is part of the Duke Tech & Check Cooperative, a $1.2 million project to automate fact-checking. The students spend up to 10 hours each week in the Reporters’ Lab, a room in the Sanford School of Public Policy decorated with movie posters from All the President’s Men, Spotlight and The Post.

The bots are computer programs that perform the tasks often done by college interns. The programs scour long transcripts and articles online and identify sentences that journalists might want to fact-check.

The students are an eclectic bunch: a data enthusiast who guzzles nutritional drinks; a Cameron Crazy who is spending his summer solving computer science problems; a Silicon Valley resident who writes code to help animals; and a snowboarder who helps run student businesses. 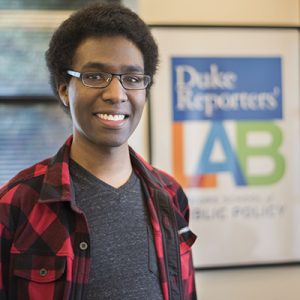 Asa Royal keeps track of his life in data. He tallies everything from the music he plays to the number of times he laughs at each television episode he watches.

Royal, a junior from St. Louis, Missouri, joined the Lab in September 2016, the height of the last election cycle, and spent four months helping with research on trends in campaign ads.

After deciding to major in computer science, Royal was tasked with figuring out how to automate the use of ClaimBuster, an algorithm developed at the University of Texas at Arlington that identifies sentences to check. His goal was to write programs that combed through dense material on the internet and submitted it to ClaimBuster without anyone having to read it.

“No one should ever read the Congressional Record,” he says. “There are about 200 pages produced per day. Nobody should be watching all 15 hours of CNN. These are problems we can solve.”

Royal built a bot that extracts content from CNN transcripts and runs it through ClaimBuster. Then, it generates a daily email of 15 checkable claims that is automatically sent to journalists. Now, he also gathers content from the Congressional Record.

Royal runs on Huel, a nutritionally complete powder that contains all of the proteins, carbohydrates, fats and 27 vitamins and minerals recommended for a healthy diet. When he first heard that some coders consume meal supplements so they don’t have to leave their computers, Royal decided to try it.

“A lot of people say it tastes like cardboard oatmeal, but I politely disagree,” he says. “It’s more like liquid porridge.”

Taking journalism courses and working at the Reporters’ Lab has changed Royal’s trajectory at Duke. Last summer, he interned at the Tampa Bay Times. After graduating, he hopes to go into computational journalism. “I realized this is what I want to code for,” he says. 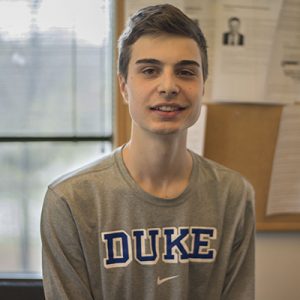 Lucas Fagan is a political junkie. He joined the Lab so he could have a role in fact-checking and debunking fake news, which he says are critical in politics today.

Fagan, a first-year from Morristown, New Jersey, is building a bot to identify checkable claims from Facebook. The program will gather content from posts written by politicians in close races.

Fagan is considering majoring in computer science and mathematics. He writes for Duke Political Review and competes with the debate team. When he’s in the Lab, he enjoys playing devil’s advocate with other staff members about anything from Duke basketball to the Russia probe.

Though he enjoys interacting with other Lab students, Fagan finds he is most productive in his dorm, where he has multiple monitors set up for coding. “I honestly enjoy the work that we’re doing, so when I need a break from homework, I’ll do work for the Lab,” he says.

Fagan feeds off the problem-solving involved in coding. “I enjoy trying to face the CS challenges more than anything else,” he says. That’s why he’s staying in Durham this summer for Data and Technology for Fact-Checking, a 10-week research program through which he will tackle natural language processing and machine learning problems. 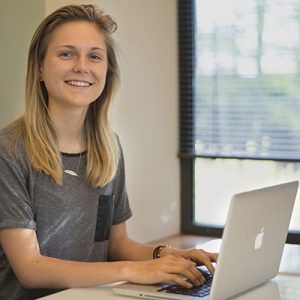 Helena Merk competes in hack-a-thons across the country, so she has ample experience designing creative tech projects. Though coding has many applications, she chooses to apply her skills to social causes.

Merk, a first-year from Palo Alto, California, is writing a program that would enable the Lab to send its daily list of checkable claims through Slack, a messaging tool utilized by newsrooms.

Merk applied to the Pratt School of Engineering, planning to study biomedical engineering. But in her first semester she realized there were other disciplines at Duke that could combine technology and health.

Now, Merk is taking computer science and global health classes. She’s spending most of the summer in Madagascar working with Duke engineers to provide water systems for local communities. “Computer science is powerful in how versatile it is,” she says. “I want to make things that help people.” 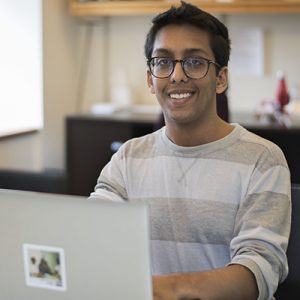 Naman Agarwal started coding in high school while he was interning for a local politician’s campaign. After spending weeks entering donor information into a spreadsheet, he built an app to automate the process.

Agarwal, a first-year from Palatine, Illinois, is now building a bot for Tech & Check to identify checkable tweets from politicians in competitive races.

Agarwal works at Campus Enterprises, a student-run LLC that provides food delivery, custom apparel and other services to Duke students. He is also a drummer and producer for Duke’s student-run record label, Small Town Records. On the weekends, he travels to snowboarding competitions with the Duke Ski Team.

Agarwal studies computer science and economics. He says he hopes to find a job that emulates his experience at the Lab. “I don’t want to contribute to work that’s just throwing money around,” he says. “I want to work at a company that has a soul.” (Photos by Evan Nicole Bell)