It’s been more than a year since the Reporters’ Lab received $1.2 million in grant funding to launch the Duke Tech & Check Cooperative. 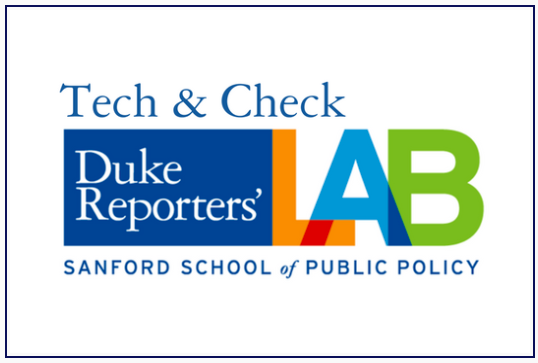 Our goal is to link computer scientists and journalists to better automate fact-checking and expand how many people see this vital, accountability reporting.

Here’s a sampling of some of the coverage about the range of projects we’re tackling:

Digital Trends, Real-time fact-checking is coming to live TV. But will networks use it?

Truth Goggles:
NiemanLab, Truth Goggles are back! And ready for the next era of fact-checking

And …
NiemanLab, So what is that, er, Trusted News Integrity Trust Project all about? A guide to the (many, similarly named) new efforts fighting for journalism
MediaShift, Fighting Fake News: Key Innovations in 2017 from Platforms, Universities and More NiemanLab, With $4.5 million, Knight is launching a new commission — and funding more new projects — to address declining public trust in media
Poynter, Knight’s new initiative to counter misinformation includes more than $1.3 million for fact-checking projects
Axios, How pro-trust initiatives are taking over the internet
Recode, Why the Craig behind Craigslist gave big bucks to a journalism program
Digital News Report (with Reuters and Oxford), Understanding the Promise and Limits of Automated Fact-Checking
Democratic Minority Staff Report, U.S. House Committee on Science, Space & Technology, Old Tactics, New Tools: A Review of Russia’s Soft Cyber Influence Operations