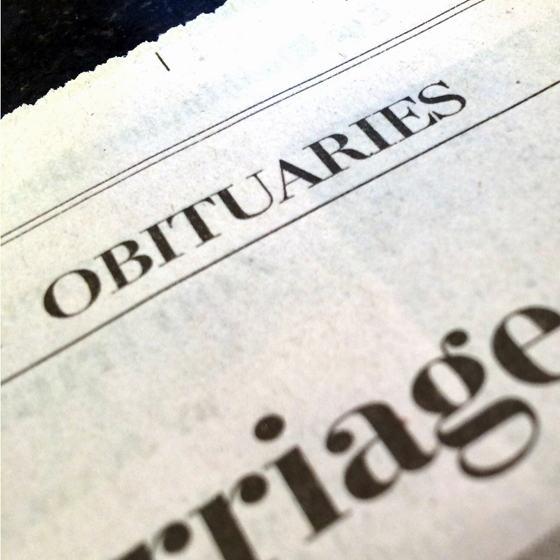 Death is truly inevitable. It’s one thing that links us all as humans. But that doesn’t mean it’s easy for most people to talk about.

That taboo is reflected on the pages of newspapers and websites that increasingly rely on funeral homes, survivors and sometimes even the deceased themselves to write the death notices — a style of writing that was once the earthly domain of professional obit writers. before digital technology began to change how we share news about death.

RELATED LINK: Will the obit outlive the death of print?

Journalists can be pretty blunt. The Associated Press Stylebook, for instance, tells journalists to stick to words like “death” or “die.” “Don’t use euphemisms like passed on or passed away except in a direct quote,” AP instructs its writers. And many big-city newspapers that still have professional obit writers on staff use that kind of wording. But paid death notices written by funeral homes and family, on the other hand, are much more likely to use more mild, indirect language to avoid sounding harsh.

After doing a little research, I found these kinds of carefully worded references to death were increasingly common in newspapers and online sites that now depend on these kinds of write-ups instead of ones written by professional journalists. The list below was drawn from obituaries that ran in local newspapers in North Carolina and California over several weeks.

The wording I found fell into three categories.

Polite Euphemisms: These references are generally ways to avoid using The Verb That Must Not Be Used — the exact opposite of the more blunt AP style. Examples I saw:

The Transcendent Experience: People often use religious or spiritual language in death notices to reflect their views on what death truly means — and what lies beyond. Examples:

More to the Story: These are often examples of what an article on Legacy.com described as “a secret code, a shorthand to mask causes of death that survivors found embarrassing” — such as an overdose or a suicide. But, as the article noted, some survivors actively resist using such language, often in hope that a loved one’s death can be helpful to other families dealing with similar issues. Examples:

Regardless of what the AP Stylebook says, there is no right or wrong with obituaries. Journalists have to follow the rules for the sake of consistency and accuracy, but for families and funeral homes, the page is their canvas. Confronting the death is an important part of the grieving process — but for many loved ones, that acceptance comes long after an obituary is published.

It makes sense then that so many smaller newspapers choose protecting the family over journalistic style. As a writer, I can marvel at just how elaborate and occasionally eccentric these euphemisms can get. Although, when I shake off the writer’s bias, I know that if one of my loved ones died, I would use every word in the dictionary to avoid “death.”

Jillian Apel is a student researcher at the Duke Reporters’ Lab.