For years, fact-checkers have been working to develop automated “pop-up” fact-checking. The technology would enable users to watch a political speech or a campaign debate while fact-checks pop onto their screens in real time.

That has always seemed like a distant dream. A 2015 report on “The Quest to Automate Fact-Checking” called that innovation “the Holy Grail” but said it “may remain far beyond our reach for many, many years to come.”

Since then, computer scientists and journalists have made tremendous progress and are inching closer to the Holy Grail. Here in the Reporters’ Lab, we’ve received $1.2 million in grants to make automated fact-checking a reality.

The Duke Tech & Check Cooperative, funded by Knight Foundation, the Facebook Journalism Project and the Craig Newmark Foundation, is an effort to use automation to help fact-checkers research factual claims and broaden the audience for their work. The project will include about a half-dozen pop-up apps that will provide fact-checking on smartphones, tablets and televisions.

One key to the pop-up apps is a uniform format for fact-checks called the ClaimReview schema. Developed through a partnership of Schema.org, the Reporters’ Lab, Jigsaw and Google, it provides a standard tagging system for fact-checking articles that makes it easier for search engines and apps to identify the details of a fact-check. ClaimReview, which can be created using the Share the Facts widget developed by the Reporters’ Lab, will enable future apps to quickly find relevant fact-checking articles.

“Now, I don’t need to scrape 10 different sources and try to wrangle permission because there’s this database that will be growing increasingly,” says Dan Schultz, senior creative technologist at the Internet Archive.

This works because politicians repeat themselves. For example, many politicians and analysts have claimed that the United States has the highest corporate tax rate. 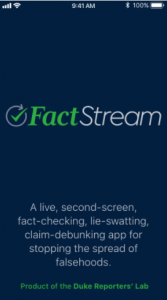 The Reporters’ Lab is developing several pop-up apps that will deliver fact-checking in real time. The apps will include:

Another project, Truth Goggles, will be a plug-in for a web browser that will automatically scan a page for content that users should think about more carefully. Schultz, who developed a prototype of Truth Goggles as a grad student at the MIT Media Lab, will use the app to experiment with different ways to present accurate information and help determine which methods are most valuable for readers.

The second phase of the pop-up apps will take the human fact-checker out of the equation. For live events, the apps will rely on voice-to-text software and then match with the database of articles marked with ClaimReview.

The future apps will also need natural language processing (NLP) abilities. This is perhaps the biggest challenge because NLP is necessary to reflect the complexities of the English language.

“Human brains are very good at [NLP], and we’re pretty much the only ones,” says Chris Guess, the Reporters’ Lab’s chief technologist for Share the Facts and the Tech & Check Co-op. Programming a computer to understand negation or doublespeak, for instance, is extremely difficult.

Another challenge comes from the fact that there are few published fact-checks relative to all of the claims made in conversation or articles. “The likelihood of getting a match to the 10,000 or so stored fact-checks will be low,” says Bill Adair, director of the Reporters’ Lab.

Ideally, computers will eventually research and write the fact checks, too. “The ultimate goal would be that it could pull various pieces of information out, use that context awareness to do its own research into various data pools across the world, and create unique and new fact-checks,” Guess says.

The Reporters’ Lab is also developing tools that can help human fact-checkers. The first such tool uses ClaimBuster, an algorithm that can find claims fact-checkers might want to examine, to scan transcripts of newscasts and public events and identify checkable claims.

“These are really hard challenges,” Schultz says. “But there are ways to come up with creative ways around them.”