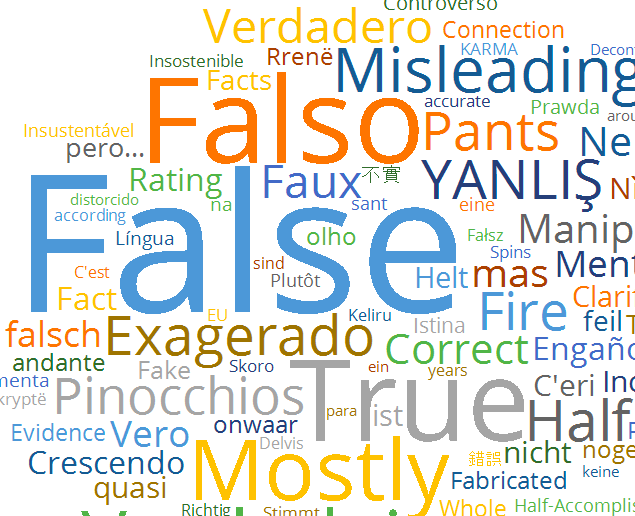 Fact-checkers have a problem.

They want to use technology to hold politicians accountable by getting fact-checks in front of the public as quickly as possible. But they don’t yet know the best ways to make their content understood. At the Duke Reporters’ Lab, that’s where Jessica Mahone comes in.

The Lab is developing Squash, a tool built to bring live fact-checking of politicians to TV. Mahone, a social scientist, was brought on board to design experiments and conduct user experience (UX) tests for Squash.

UX design is the discipline focused on making new products easy to use. A clear UX design means that a product is intuitive and new users get it without a steep learning curve.

“If people can’t understand your product or find it hard to use, then you are doomed from the start. With Squash, this means that we want people to comprehend the information and be able to quickly determine whether a claim is true or not,” Mahone said

For Squash, fact-check content that pops up on screens needs to be instantly understood since it will only be visible for a few seconds. So what’s the best way?

Bill Adair, the director of the Duke Tech & Check Cooperative, organized some preliminary testing last year that he dubbed the red couch experiments. The tests revealed more research was needed to understand the best way to inform viewers.

“I originally thought that all it would take is a Truth-O-Meter popping up on screen,” Adair said. “Turns out it’s much more complicated than that.”

Sixteen people watched videos of Barack Obama and Donald Trump delivering State of the Union speeches while fact-checks of some of what they said appeared on the screen. Ratings were true, false or something in between. Blink, a company specializing in UX testing, found that participants loved the concept of real-time fact-checking and would welcome it on TV broadcasts. But the design of the pop-up fact-checks often confused them.

Some viewers didn’t understand the fact-check ratings such as true or false when they were displayed. Others assumed the presidents’ statements must be true if no fact-check was shown. That’s a problem because Squash doesn’t fact-check all claims in speeches. It displays published previously fact-checks for only the claims that match Squash’s finicky search algorithm.

The red couch experiments were “a very basic test of the concept,” Mahone said. “What they found mainly is that there was a need to do more diving in and digging into the some questions about how people respond to this. Because it’s actually quite complex.”

Mahone has developed a new round of tests scheduled to begin this week. These tests will use Amazon Mechanical Turk, an online platform that relies on people who sign up to be paid research subjects.

“One thing that came out of the initial testing was that people don’t like to see a rating of a fact-check,” Mahone said. “I was a little skeptical of that. Most of the social science research says that people do prefer things like that because it makes it a lot easier for them to make decisions.”

Each viewer will rank how interested they are in using an automated fact-checking tool after viewing the different displays. Mahone will compare the results.

After finding out if including ratings works, Mahone and three undergraduate students, Dora Pekec, Javan Jiang and Jia Dua, will look at the bigger picture of Squash’s user experience. They will use a company to find about 20 people to talk to, ideally individuals who consistently watch TV news and are familiar with fact-checking.

Participants will be asked what features they would want in real-time fact-checking.

“The whole idea is to ask people ‘Hey, if you had access to a tool that could tell you if what someone on TV is saying is true or false, what would you want to see in that tool?’ ” Mahone said. “We want to figure out what people want and need out of Squash.”

Figuring out how to make Squash intuitive is critical to its success, according to Chris Guess, the Lab’s lead technologist. Part of the challenge is that Squash is something new and viewers have no experience with similar products.

“These days, people do a lot more than just watch a debate. They’re cooking dinner, playing on their phone, watching over the kids,” Guess said. “We want people to be able to tune in, see what’s going on, check out the automated fact-checks and then be able to tune out without missing anything.”

Reporters’ Lab researchers hope to have Squash up and running for the homestretch of the 2020 presidential campaign. Adair, Knight Professor of the Practice of Journalism and Public Policy at Duke, has begun reaching out to television executives to gauge their interest in an automated fact-checking tool.

“TV networks are interested, but they want to wait and see a product that is more developed.” Adair said.