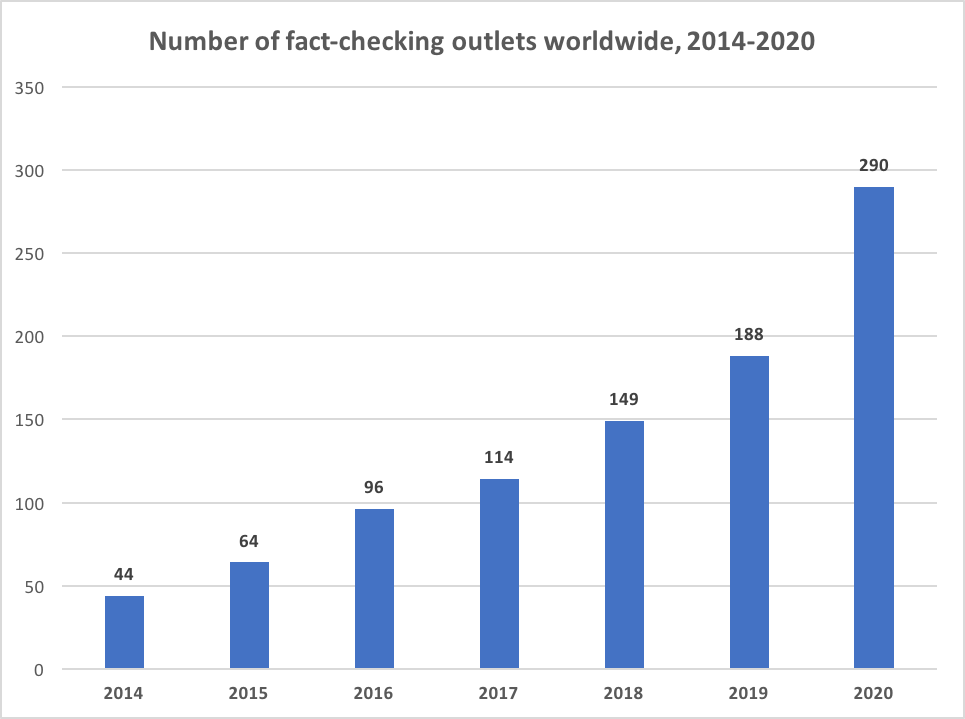 With elections, unrest and a global pandemic generating a seemingly endless supply of falsehoods, the Duke Reporters’ Lab finds at least 290 fact-checking projects are busy debunking those threats in 83 countries.

That count is up from 188 active projects in more than 60 countries a year ago, when the Reporters’ Lab issued the annual census at the Global Fact Summit in South Africa. There has been so much growth that the number of active fact-checkers added in the past year alone more than doubles the total number when the Lab began to keep track in 2014. 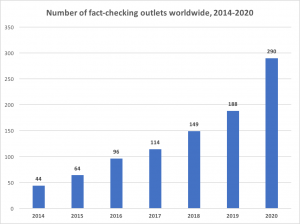 There has been plenty of news to keep those fact-checkers busy, including widespread protests in countries such as Chile and the United States. Events like these attract a broad range of new fact-checkers — some from well-established media companies, as well as industrious startups, good-government groups and journalism schools.

Our global database and map shows considerable growth in Asia, particularly India, where the Lab currently counts at least 20 fact-checkers at the moment. We also saw a spike in Chile that started with the nationwide unrest there last fall.

Fact-Checkers by Continent Since June 2019

But the coronavirus pandemic has been the story that has topped almost every fact-checking page in every country since February.

At least five fact-checkers on the Lab’s map already focused on public health and medical claims. One of the newest is The Healthy Indian Project, which launched last year. But the pandemic has turned almost every fact-checking operation into a team of health reporters. And the International Fact-Checking Network also has coordinated coverage through its #CoronaVirusFacts Alliance.

The pandemic has also turned IFCN’s 2020 Global Fact meeting into a virtual conference this week, instead of the in-person gathering originally planned in Oslo, Norway. And one of the themes participants will be talking about are the institutional factors that have generated more interest and attention for fact-checkers.

To combat increasing online misinformation, major digital platforms in the United States, including Facebook, WhatsApp, Google and YouTube, have provided incentives to fact-checkers, including direct contributions, competitive grants and help with technological infrastructure to increase the distribution of their work. (Disclosure: Facebook and Google separately help fund research and development projects at the Reporters’ Lab, and the Lab’s co-directors have served as judges for some grants.)

Many of these funding opportunities were specifically for signatories of the IFCN’s Code of Principles, a charter that requires independent accessors to regularly review the editorial and ethical practices of each fact-checker that wants its status verified.

A growing number of fact-checkers are also part of national and regional partnerships. These short-term collaborations can evolve into longer-term partnerships, as we’ve seen with Brazil’s Comprova, Colombia’s RedCheq and Bolivia Verifica. They also can inspire participating organizations to continue fact-checking on their own.

Over time, the Reporters’ Lab has tried to monitor these contributors and note when they have developed into fact-checkers that should be listed in their own right. That’s why our database shows considerable growth in South Korea — home to the long-standing SNU FactCheck partnership based at Seoul National University’s Institute of Communications Research.

As has been the case with each year’s census, some of the growth also comes from established fact-checkers that came to the attention of the Reporters’ Lab after last June’s census was published — offset by at least nine projects that closed down in the months that followed.

But the overall trend was still strong. Overall, 68 of the projects in the database launched since the start of 2019. And more than half of them (40 of the 68) opened for business after the 2019 census, including 11 so far in the first half of 2020. And most of them appear to have staying power. Of those 68, only four are no longer operating. And three of those were election-related collaborations that launched as intentionally short-term projects.

We also have tried to be more thorough about discerning among specific projects and outlets that are produced or distributed by different teams within the same or related organizations. The variety of strong fact-checking programs and web pages produced by variously affiliated French public broadcasters is a good example. (Here’s how we decide which fact-checkers to include in the Reporters’ Lab database.)

The increasing tally of fact-checkers, which continues a trend that started in 2014, is remarkable. While this is a challenging time for journalism in just about every country, public alarm about the effects of misinformation is driving demand for credible reporting and research — the work a growing list of fact-checkers are busy doing around the world.

The Reporters’ Lab is grateful for the contributions of student researchers Amelia Goldstein and Matthew Griffin; journalist and media/fact-checking trainer Shady Gebril; fact-checkers Enrique Núñez-Mussa of FactCheckingCL and EunRyung Chong of SNU FactCheck; and the staff of the International Fact-Checking Network. The Reporters’ Lab updates its fact-checking database throughout the year. If you have updates or information, please contact Mark Stencel and Joel Luther.