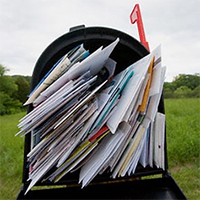 Avoiding campaign ads during the 2016 election has been futile. Even if you turn off your TV, political ads pile up in a place you can’t ignore: your mailbox.

But there are some surprising findings in all that political mail. The fliers are more substantive than we expected and at least some of them have more positive claims about candidates than attacks on opponents.

Along with student researcher Hank Tucker, I analyzed 40 pieces of political mail that were sent to Bill Adair, director of the Reporters’ Lab and a Durham resident, beginning in late August. Of these mailers, 11 related to the presidential campaign; 20 to the U.S. Senate seat held by Richard Burr; and five to the gubernatorial race. One involved the North Carolina State Treasurer race, and three applied to multiple races.

We started with a hypothesis: Despite the elaborate graphics and eye-catching text, these pieces of mail wouldn’t actually say much about the candidates, their platforms or their political experience.

That wasn’t the case. Although several fliers did grab readers’ attention with ominous sentences — a Senate race mailing said, “‘My mom taught me to respect myself, to work twice as hard and to stand up to men like Richard Burr’” — a majority of the mail did integrate candidates’ policies, positions and voting histories. Only eight did not.

That same attack on Burr goes on to cite his votes against equal pay, against extending the Violence Against Women Act and against funding to reduce North Carolina’s rape kit backlog.

Another piece of mail accuses Deborah Ross of opposing the creation of North Carolina’s sex offender registry. The mailing reads, “As a radical political activist working for North Carolina’s ACLU, Deborah Ross opposed the bipartisan plan… Her concern? It could make it hard for dangerous predators ‘to reintegrate into society… and could lead to vigilantism.’”

Not every ad was negative. Of the 40 mailers we examined, 16 portrayed candidates in a positive light, while also touting their views on particular issues. For example, a postcard from the For Our Future PAC says that Hillary Clinton will “fight for climate change policy and has a plan to make equal pay for equal work a reality, invest in pre-K and make college affordable for all.” Another pro-Clinton mailing, paid for by the Democratic Party of North Carolina, shares details of her plans for the economy, international relations and paid family leave.

It’s worth noting that some pieces of mail weren’t specific in their description of a candidate’s policy plans. A door hanger from Donald Trump’s campaign managed to lay out his plans for the country without ever explaining how he’ll accomplish his goals. Using phrases like “America first,” “ending political corruption” and “safer, stronger America,” it fails to detail how Trump would make the country more secure or prevent politicians from lining their own pockets.

Also, some big and important issues were missing from the mailings, including Social Security, the federal budget and Medicare. Only one of the ads we looked at — which came from the nonpartisan Women’s Voices Women Vote Action Fund — mentioned Medicare, citing Burr’s support and Ross’ opposition of privatizing the system. Social Security wasn’t mentioned on any of the 40 mailings, nor was the federal budget — although one pro-Clinton ad claimed that “Trump’s tax plan would add trillions to the national debt.”

Many of the fliers were reruns that cycled through the same talking points (Deborah Ross raised taxes by $3 billion! Richard Burr voted to defund Planned Parenthood!).

Though many Americans are likely throwing these mailings directly in the trash, they offer something that TV and radio advertisements cannot: a slightly more substantive look at a candidate’s experience and values. Whereas televised campaign ads only have 30 seconds to get their points across — and viewers are often distracted by any number of variables — a tangible piece of mail allows voters to sit down and absorb the information.

Still, voters should be wary. We didn’t fact-check all the claims, but students in Bill’s newswriting and reporting class checked a sampling of the claims and rated them using PolitiFact’s Truth-O-Meter. The average rating: Half True.