It is no secret that news consumers are finding it increasingly difficult to separate fact from fiction, especially when it comes to politics.

Sure, they can visit journalism’s traditional truth-seeking outlets — such as PolitiFact or FactCheck.org — if they are looking for the whole story. But what if they want a quicker fix? What if they want to know, with the click of a button, if the article they are reading may include fabricated content? Well, there may now be an app for that — in fact, many apps.

The wave of falsehoods that dominated the 2016 election cycle has inspired several enterprising companies and individuals to create mobile applications and web browser extensions to promote fact-checking and detect stories with falsehoods.

In a recent analysis for the Reporters’ Lab, I identified at least 45 fact-checking and falsehood-detecting apps and browser extensions available for download on the Apple or Android app stores, the Google Chrome web store and Firefox. Many share similar design characteristics and functionality.

Several of the best apps and extensions simply make fact-checks more accessible. These apps, including Settle It! Politifact’s Argument Ender, let users view and filter through fact-checks aggregated from online fact-checking sites. (Disclosure: Bill Adair, director of the Reporters’ Lab, contributed to the creation of this app.) Some, like The Washington Post’s RealDonaldContext, are specifically tailored to fact-check President Donald Trump’s tweets.

A few extensions — such as FakerFact or NewsCracker — evaluate credibility online by generating algorithmic scores to predict whether particular web pages are likely true or false. I found both extensions questionable because it is not clear which inputs are driving their algorithms. But they show nonetheless that fully automated fact-checking may not be so far away — even if FakerFact and NewsCracker are themselves lacking in transparency and value.

Other extensions enable users to crowdsource fact-checks. Users of these community-oriented platforms can flag and provide fact-checks online for other users to see. Where these extensions fail, however, is in training their users to fact-check. My analysis noted that several users have submitted fact-checks for opinion statements — and several others have disputed statements on a hyper-partisan basis.

Many of the existing apps and extensions are designed to spot, detect or block false stories. Some alert readers to any potential “bias” associated with a website, while others flag websites that may contain falsehoods, conspiracy theories, clickbait, satire and more. Some even provide security checks for spear phishing and malware. One drawback to these apps and extensions, however, is that their assessments are subjective — because all such apps and extensions are discretionary, none can honestly claim to be the end-all arbiter of truth or political bias.

In summary, some of the identified apps and extensions — like FactPopUp, our own Reporters’ Lab app that provides automated fact-checks to users watching the live stream of a political event — show signs of being on the cutting edge of fact-checking. The future is certainly bright. But not all of the market’s apps and extensions are highly effective in their current form.

Fact-checking and falsehood detection apps and extensions should be considered supplements to — not replacements of — human brain power. Given that caveat, below are three of what I found to be the most refined options. They are ready for action as news-reading supplements. 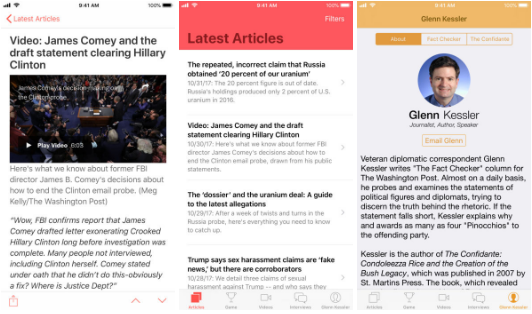 GlennKessler, available for free download on Apple’s app store, is an aggregation of fact-checks from Glenn Kessler of The Washington Post’s Fact Checker. Kessler’s son, Hugo, created the app when he was 16 years old.

Users of GlennKessler can view fact-checked claims and filter them according to the number of “Pinocchios” they received or the political party of the speakers. The app also includes videos related to fact-checking and interviews with Glenn Kessler, as well as a game where users can test their fact-checking knowledge. As an added feature, users can learn about and email questions directly to Kessler himself.

The Official Media Bias Fact Check Icon, a free extension for Chrome browsers, purports to provide “bias” ratings for more than 2,000 media sources online. While browsing the internet, users are presented with a color-coded icon denoting each website’s “bias.”

A related extension, the Official Media Bias Fact Check Extension, highlights “bias” within Facebook’s news feed. Users can ask the extension to eliminate sources fitting a particular “bias” rating from appearing in their feed. Unfortunately, this “collapse” feature brings with it the possibility that users will abuse the extension to reinforce existing filter bubbles within an increasingly fragmented social media landscape.

It is important to remember as well that Media Bias Fact Check claims to find “bias” according to its own labeling methodology. This is a complicated assessment, so users should take the ratings with a grain of salt. As committed as a site may be to the truth, there can truly be no definitive rating for something so sensitive as political bias. 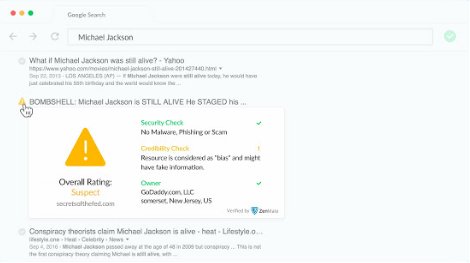 ZenMate SafeSearch and Fake News Detector, a free extension for Chrome browsers from the Berlin-based startup ZenMate, signals whether a website is “good” or “suspect.” Users see ratings not only of a website’s credibility, but also of its security and ownership. The extension does not work for articles appearing on social media.

Per the extension’s description, ZenMate SafeSearch “aggregates and enriches various databases and feeds” in order to assess the credibility of various webpages. I found this low level of transparency alarming. As with Media Bias Fact Check’s extensions, users should be wary that ZenMate’s ratings are by nature subjective. The concept of “bias” is likely more complicated for an algorithm to score.