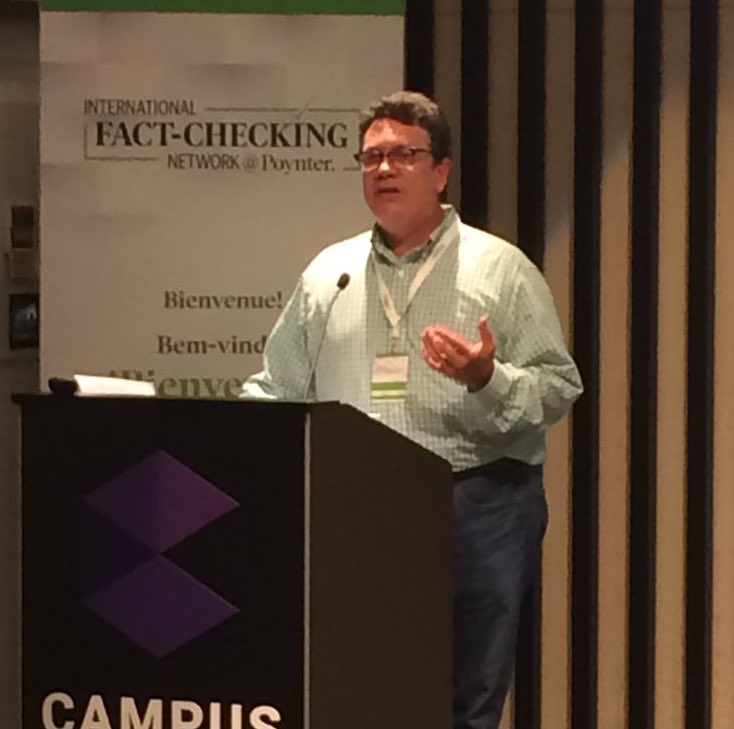 My opening remarks at Global Fact 4, the fourth annual meeting of the world’s fact-checkers, organized by the International Fact-Checking Network and the Reporters’ Lab, held July 5-7, 2017 in Madrid, Spain.

It’s wonderful to be here in Madrid. I’ve been enjoying the city the last two days, which has made me think of a giant warehouse store we have in the United States called Costco.

Costco where you go when you want to buy 10 pounds of American Cheese or a 6-pound tub of potato salad. Costco also makes a delicious fried pastry called a “churro.” And because everything in Costco is big, the churros are about three feet long.

When I got to Madrid I was really glad to see that you have churros here, too! It’s wonderful to see that Costco is spreading its great cuisine around the world!

I’m pleased to be here with my colleagues from the Duke Reporters’ Lab — Mark Stencel, Rebecca Iannucci and Riley Griffin. We also have our Share the Facts team here – Chris Guess and Erica Ryan. We’ll be sampling the churros throughout the week!

It’s been an amazing year for fact-checking. In the U.K., Full Fact and Channel 4 mobilized for Brexit and last month’s parliamentary elections. In France, the First Draft coalition showed the power of collaborations during the elections there. In the United States, the new president and his administration drove record traffic to sites such as FactCheck.org and PolitiFact and the Washington Post Fact Checker — and that has continued since the election, a time when sites typically have lower traffic. The impeachments and political scandals in Brazil and South Korea also meant big audiences for fact-checkers in those countries. And we expect the upcoming elections in Germany, Norway and elsewhere will generate many opportunities for fact-checkers in those countries as well, just as we’ve seen in Turkey and Iran. The popular demand for fact-checking has never been stronger.

Fact-checking is now so well known that it is part of pop culture. Comedians cite our work to give their jokes credibility. On Saturday Night Live last fall, Australian actress Margot Robbie “fact-checked” her opening monologue when she was the guest host.

Some news organizations not only have their own dedicated fact-checking teams, they’re also incorporating fact-checks in their news stories, calling out falsehoods at the moment they are uttered. This is a marvelous development because it helps to debunk falsehoods before they can take root.

We’ve also seen tremendous progress in automation to spread fact-checking to new audiences. There are promising projects underway at Full Fact in Britain and at the University of Texas in Arlington and in our own lab at Duke, among many others. We’ll be talking a lot about these projects this week.

Perhaps the most important development in the past year is one that we started at last year’s Global Fact conference in Buenos Aires – the Code of Principles. We came up with some excellent principles that set standards for transparency and non-partisan work. As Alexios noted, Facebook is using the code to determine which organizations qualify to debunk fake news. I hope your site will abide by the code and become a signatory.

At Duke, Mark just finished our annual summer count of fact-checking. Mark and Alexios like to tease me that I can’t stop repeating this mantra: “Fact-checking keeps growing.”

But it’s become my mantra because it’s true: When we held our first Global Fact meeting in 2014 in London, our Reporters’ Lab database listed 48 fact-checking sites around the world. Our latest count shows 126 active projects in 49 countries.

I’m thrilled to see fact-checking sprouting in countries such as South Korea and Germany and Brazil. And I continue to be amazed at the courage of our colleagues who check claims in Turkey and Iran, which are not very welcoming to our unique kind of journalism.

As our movement grows, we face new challenges. Now that our work is so well-known and an established form of journalism, governments and political actors are calling themselves fact-checkers, using our approach to produce propaganda. We need to speak out against this and make sure people know that government propagandists are not fact-checkers.

We also need to work harder to reach audiences that have been reluctant to accept our work. At Duke we published a study that showed a stark partisan divide in the United States. We found liberal publications loved fact-checking and often cited it; conservative sites criticized it and often belittled it. We need to focus on this problem and find new ways to reach reluctant audiences.

I’m confident we can accomplish these things. Individually and together we’ve overcome great hurdles in the past few years. I look forward to a productive meeting and a great year. And I’m confident: