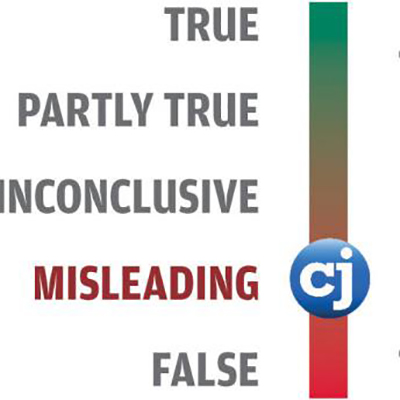 A lot of good fact-checking took place last year at the local level. But good luck finding it.

Regional fact-checkers are not using basic digital publishing practices — such as landing pages, tagging and social media — to promote their fact-checks, according to a report co-authored by Duke Reporters’ Lab co-director Mark Stencel and research coordinator Rebecca Iannucci.

The report, published by the Poynter Institute on Oct. 16, was derived from work by the Lab’s student researchers, who reviewed nearly 40 regional media outlets that fact-checked political claims during last year’s election cycle.

One of those outlets, The Topeka Capital-Journal, did have a landing page for its “Kansas Fact Meter.” But the landing page was inactive and did not showcase the majority of its fact-checks dating back to 2014, or the ones it published after January 2016.

Tim Carpenter, the Capital-Journal’s Statehouse Bureau Chief and the founder of the Kansas Fact Meter, said he did not know the fact-checking project had a landing page, but he admitted it might be beneficial to have one.

“I’ve never done a full accounting [of the Kansas Fact Meter],” Carpenter said in a phone interview with the Reporters’ Lab. “Having a page…people could go to directly — or a link to all of them — is a great idea.”

The Lab’s report noted that local news organizations that partnered with PolitiFact as one of the national fact-checker’s state affiliates got a boost from working with a website that was already structured in ways to help generate traffic. But half of the state and local fact-checking sites the Lab’s student researchers reviewed were more like the Kansas Fact Meter — a standalone project, often championed in the newsroom by handful of journalists, like Carpenter.

“It’s probably my fault for not hitting that designation when I file stories,” he said referring to a specific tag on the Capital-Journal’s publishing platform that would easily group fact-checks on the site. “I will do better.”