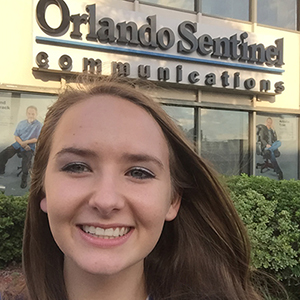 During the next several weeks, we will be taking a closer look at the summer internships held by students in the Policy Journalism and Media Studies certificate program and the Duke Reporters’ Lab. The students below are all working at journalism internships, but others are exploring fields such as political consulting and speechwriting. (Continue with Part 2 and Part 3 of this series.) 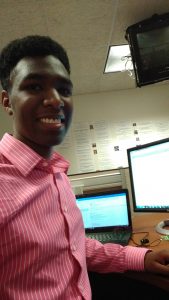 In his first two months at the Tampa Bay Times, Asa Royal has written about local politics, a cemetery and an 800-pound fish. His article on a goliath grouper harassing local fishermen even made it on the front page of the print edition.

Royal is interning as a general assignment reporter at the St. Petersburg, Fla., newspaper, which means every day he may need to explore a completely new topic.

Royal, a computer science major and the previous co-chair of the Duke Chronicle editorial board, had limited experience in news reporting when he began the internship. His classes for the Policy Journalism and Media Studies certificate had taught him the basics, but the immersive experience of day-to-day reporting has given him a much richer understanding of what journalism is like. He also has enjoyed the characters and issues about which he has written.

He closely follows national politics, so the experience of reporting on local news has been eye-opening. His most memorable story involved a black socialist party’s mayoral endorsement ceremony. Royal was struck by how local politics is different.

What matters in a mayoral race are issues such as the success of a certain school or the design of certain neighborhood infrastructure, he discovered.

Royal has been energized by the questions that the local issues raise.

“Every day, I sit next to reporters who can answer those questions,” Royal said. “They know more about their beats than I will ever know in my lifetime. So it’s been a humbling and incredible experience to spend time with them and see for myself that, in the grand scheme of things, I don’t know that much.” 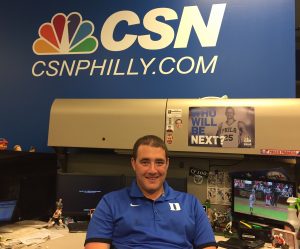 Mitchell Gladstone is taking the plunge into the fanatical world of Philadelphia sports. A regular workday might find him covering a Phillies game, an Eagles training camp, or even the 76ers’ NBA draft preparations.

Working as a digital media writing intern for Comcast SportsNet Philadelphia, Gladstone reports on all four of the city’s major professional sports teams: the Phillies the Eagles, the Flyers, and the 76ers. He also covers a variety of other college and local sports.

As the incoming sports managing editor for the Duke Chronicle, Gladstone is excited to use this summer’s experience to reimagine the Chronicle’s online platforms. He said he has been amazed to learn of the intricate operations involved in running an effective news website.

“At CSN, a web producer is not only writing and editing, but constantly moving stories around on the main and team pages,” Gladstone said. “There’s also the tasks of constantly changing the main block with stories and photos, as well as setting the streams for live baseball games and other newsworthy events. It’s also critical to get out immediate breaking news tweets and app alerts, all things that I’m not used to in my daily work at school.”

Of the stories Gladstone has covered, interviewing pinch-hitter Ty Kelly after his game-winning hit for the Phillies against the Boston Red Sox ranks among his most entertaining experiences. Kelly, who had only joined the Phillies’ roster two months previously, was himself startled by his unlikely but decisive play. Gladstone is looking forward to profiling outfielder Mickey Moniak, the team’s No. 1 overall pick from the 2016 MLB draft.

Above all, Gladstone said he has enjoyed the simple pleasures of writing for a large audience.

“When you look up on the wall and see how many people are looking at your story, there’s a sense of pride knowing that you can hang with those who are doing this as a full-time, salaried job,” he said. “It reminds you that you can do whatever you love so long as you give it the passion and energy it deserves.” 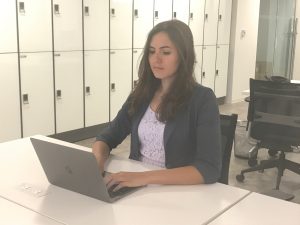 From the visa issues of pool lifeguards to up-and-coming startups and county government decisions, Katherine Berko is focusing on community news.

Berko is interning at ARLNow, the flagship of Local News Now, a company that delivers online local news in the Washington suburbs.

“I write about everything,” Berko said. “I’ve covered events like the opening of a new tattoo shop to local leaders’ reactions to Trump’s climate decisions to a meal kit startup to homelessness in the area to a short piece about a stick of deodorant that was on top of the bus stop for over a week. Now that was funny!”

Berko, a student seeking the Policy Journalism and Media Studies certificate, has taken courses in newswriting and local news during her time at Duke. She was introduced to the inner workings of local government in a class called The Durham City Beat, while another class, News as a Moral Battleground, enabled her to develop an ethical lens into journalism. Both classes have given her valuable and practical insights into her current reporting.

For Berko, covering a community is a great way to get an in-depth understanding of the people and their local government. Berko’s most memorable story covered a recently-opened homeless shelter, an experience that allowed her to relate to the county’s progress in reducing homelessness. She is also working on a long-term project investigating the gender imbalance in the website’s readership.

High levels of online engagement have impressed on Berko the weight of a journalist’s responsibility in reporting news. Her piece on Trump drew more than 130 reader comments.

“The most fulfilling aspect of my internship is knowing that my boss trusts me enough to tell stories and give them the attention they deserve every time I’m assigned a new beat,” Berko said. “It’s daunting because I want to ensure I don’t miss anything in the story, but incredibly rewarding when I feel that I have taught my readers something. It’s truly an honor to know that each person reading my article is trusting my ethics, reporting capabilities and accuracy.” 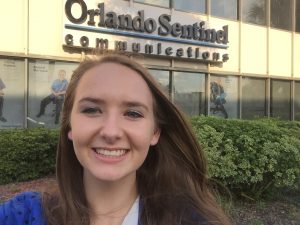 The headlines on Amelia Cheatham’s stories at the Orlando Sentinel illustrate the wide range of crime and mayhem she gets to cover every day: Polk County inmate dies while in custody. Clerk thwarts robbery at Orlando 7-Eleven. Man wanted in 2013 murder case arrested in Dominican Republic.

Following leads on law enforcement logs and social media, Cheatham’s role is to keep readers informed of news as it’s happening. Most of her stories cover local crime and law enforcement, though she has also written on the rehabilitation of turtles and Florida’s “Donut Boy.” Though she expected the newsroom to be fast-paced, the sheer velocity of breaking news still surprised her.

Covering breaking news makes her appreciate all the work that it takes to write a story.

“Previously, when I scrolled through headlines in my Facebook feed, I never truly considered the minutes, hours and days of effort someone, somewhere devoted to creating that content,” Cheatham said. “I certainly appreciated journalism as a challenging endeavor; however, I didn’t begin to understand just how tough it can be until I spent a few weeks in a metaphorical reporter’s hat.”

Cheatham, a global health major at Duke, has also been able to find opportunities at the Sentinel to fuse her interests in health and journalism. With the help of her direct editor, Janet Reddick, and the newspaper’s health reporter, Naseem Miller, she has interviewed survivors, a politician, and researchers for a piece on preeclampsia.

Ultimately, the interpersonal aspects of interviewing and reporting on subjects are what she relishes the most.

“I’ve spoken with people in the midst of several emotionally difficult situations, from the anniversary of the Pulse nightclub shooting to the traumatic death of a close friend or relative,” Cheatham said. “It’s gratifying to know that through my journalism, I’m helping to ensure that event or individual is not as easily erased from the public consciousness. I strive to recognize the humanity behind the names on a sheriff’s office press release.”