The Global Fact 4 summit came to a close Friday, after much reflection on the last year of fact-checking and discussion about future advancements in the industry.

Ana Pastor, director and anchor of Spain’s El Objetivo, and Guillermo Solovey of the Instituto de Cálculo held a Q&A on the rejection of facts by polarized populations. Later, Tom Rosenstiel, executive director of the American Press Institute, argued that individual claims should no longer be the “atomic unit” of fact-checks. Following a presentation by representatives from Facebook and Google, and a panel on fake news, the day ended in a standing ovation for Alexios Mantzarlis, director of the International Fact-Checking Network and the organizer of the conference.

Below is our final roundup of noteworthy moments from the summit, from social media interactions to memorable slides.

.@Mantzarlis asks when Facebook and Google will share data on which pilots & changes work so that #GlobalFact4 can plan our next moves pic.twitter.com/7xKavNeMfG

Áine Kerr, manager of journalism partnerships at Facebook, and Philippe Colombet, head of strategic partnerships for news and publishers at Google, held a joint panel on how their respective platforms could benefit fact-checkers. During the Q&A, Mantzarlis asked the two technology experts if they would be willing to share data and metrics concerning the impact of their news initiatives with journalists. After Kerr and Colombet struggled to provide a definitive answer, some fact-checkers tweeted their concern about the lack of transparency between tech companies and the media. Phoebe Arnold, head of communications and impact at Full Fact, documented the moment in the tweet above.

Slide of the day 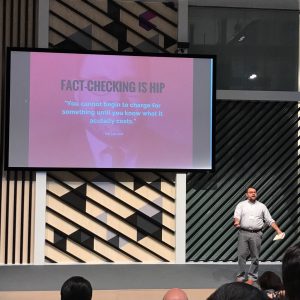 Aaron Sharockman, executive director of PolitiFact, led a presentation called “Funding for fact-checking: beyond foundations,” to teach resource-deficient organizations how to generate revenue, capitalize on crowdfunding and find investors. To emphasize his message, Sharockman put up a slide with a personal quote: “You cannot begin to charge for something until you know what it actually costs.” Sharockman’s parting advice to fact-checkers was to know their own value in the current political landscape and to take advantage of the increased awareness of the industry.

Quote of the day

“Everyone says they’re interested in truth, but I’m not sure that they are.” — Ana Pastor, director of El Objetivo

Trust was a central topic of Friday’s Global Fact discussions, particularly as it applies to the waning trust between fact-checkers and their audience. During Pastor and Solovey’s conversation, they both addressed a major frustration for fact-checkers: Readers often reject facts that don’t align with their beliefs, choosing instead to live in a “news bubble” that only accepts one side of an argument.

“Realizing that something is a lie doesn’t change their perspectives,” Solovey said of readers who are deeply entrenched in their stances. Pastor also noted that “people don’t want their ideas questioned, they want them reaffirmed,” which contributes significantly to an audience’s lack of trust in fact-checkers and the collective media.

For more coverage from Global Fact 4, check out the following articles: